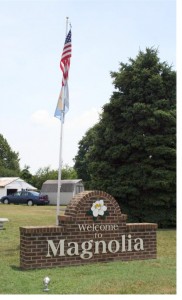 The Town of Magnolia claims both Swedish and Dutch heritage but was formally founded in 1885 by citizens within the Murderkill Hundred, including Thomas H. McIlvaine, John B. Conner, Thomas Draper, James L. Heverin, William S. McLain, John W. Wall, Alexander Jackson, Jacob Prettyman, and Captain James Grier. These founders laid out the boundary of the town, designing it as a circle to represent brotherhood. They used chords to create a circular boundary with a one-quarter mile radius.

Magnolia was built approximately one mile from the St. Jones River and, according to folklore, originated because settlers depended on the river, but wanted to escape mosquitoes that accompanied it.

The original area where the town is located was known as Caroon Manor, a 3000-acre tract of land owned by the Duke of York. The Magnolia tree was the Duke’s favorite tree, hence, the name of the town. A number of magnolia trees planted throughout the town still exist. The Sons of Liberty played a part in the early legal system in Magnolia and also influenced the designation of a circular town boundary.

Churches have made a significant impact on the community of Magnolia. The Magnolia Methodist Church was built in 1856 and is located on Main Street. The church burned down on Pearl Harbor Day (December 7, 1941) when no one responded to the fire whistle because everyone thought the whistle was due to Pearl Harbor being bombed. The church was rebuilt soon afterwards. Motherkill Friends’ Burial Ground, a historic Quaker cemetery, is located adjacent to the town’s northeastern border. This area is known as the “Quaker Graveyard,” dating back to the late 1700s with fieldstones marking the gravesites. 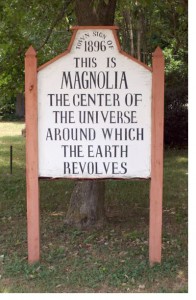 The Town of Magnolia was officially recognized by the Delaware General Assembly as an incorporated area on April 3, 1885. There are two locations in Magnolia that appear on the National Register of Historic Places. One location is the John B. Lindale House, a privately owned residence that was built in the early 1900s that has both agricultural and architectural significance and was home to one of the last great peach barons in Delaware. A sign located outside the house proudly boasts:

“This is Magnolia, the center of the universe around which the earth revolves.”

The other registered location is the Matthew Lowber House, which also has architectural historical significance. Built in 1774 as a domestic dwelling, this Quaker mansion generated some publicity for Magnolia when it was physically lifted and moved from its original site to its present location in the early 1980s.

In 1928 Magnolia formed one of the first volunteer fire companies in the state, and around the same time installed its first water well. In 1957 the Legislature authorized a referendum to be held in Magnolia to decide whether the boundaries of the town should be extended in order to annex previously unincorporated areas. However, due to the limited services provided by the town, residents of the areas in question felt they would simply acquire a greater tax burden with few advantages. The referendum was defeated.

Possibly in response to this defeat, the town was reincorporated in 1960 with the scope of the town’s governmental authority greatly expanded. The council, with one member now designated as Mayor, was authorized to increase its borrowing limits to help finance new services and establish zoning ordinances to regulate growth within the town. The Town’s unique circular boundary has remained intact since 1885.